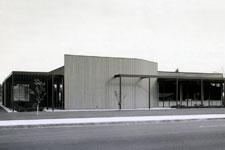 In 1961, William B. Wood, the Library Association of Portland’s director at the time, studied library use throughout Multnomah County by comparing existing library branches to recent population changes. The staff study committee recommended that five new branch buildings be erected, three of which would be used to consolidate the operations of six inefficient branches, and one to replace another older building. The only new branch recommended that would not replace another was the Rockwood Branch. In 1962, the Library Association of Portland purchased land and drew building plans for a new Rockwood Library.

According to the Library Association of Portland’s 1962-63 annual report, “The Rockwood Branch, located about halfway between the Midland and Gresham branches, will serve a growing area with a population of over 20,000, a high percentage of which are children.”

The new 5,724-square-foot Rockwood Library was dedicated on April 10, 1963. The building opened with a new collection of 12,000 books, with room to expand to 20,000 volumes. The first librarian was Miss Helen Gorder.