Neighborhood library service in Southwest Portland began with a small book "deposit station," one of three new library stations that opened in Multnomah County in 1913. Deposit stations were comprised of a small collection of 30 to 50 books made available in a location other than the main library building in downtown Portland. On December 13, a larger building, the South Portland sub-branch, opened in a temporary building at the corner of First and Hooker streets. It was busy, and the only sub-branch open on Sundays for reading and the circulation of books.

As library service in neighborhoods expanded, the library made efforts to enhance service to Portland’s immigrant populations. According to the Library Association of Portland’s 1915 annual report, "To attract the foreigners to the libraries is quite as important as the work with the children and the schools, for to many of these new Americans the library takes the place of school, and often the shy and bewildered man or woman will venture into the small library when he would be overawed by a larger and finer building."

Also in 1915, the Library Association of Portland determined that the South Portland location needed a new building; the annual report at that time stated, “now all tables are full, every chair occupied and many book shelves empty. The most pressing need in the Branch department is a new building at this point. The present structure is not only too small, but built for temporary use in the first place, is rapidly falling to pieces.”

In 1921, the South Portland branch moved into new quarters at Second Avenue and Hooker Street, donated by the Carnegie Corporation of New York. That year’s annual report describes the move into the new Carnegie building, which included a procession of children carrying the books, “shelf by shelf, from the old building to the new.”

In 1922, four deposit stations within Multnomah County were temporarily closed, nine discontinued and five new ones opened, including one located in the community church at Multnomah, where members of the local library committee shared the custodial responsibilities for the collection.

The South Portland branch, the only branch on the west side of Portland at that time, was downgraded to a “station” in 1940, since the development of arterial highways and a dwindling residential population caused a decrease in use. The South Portland station closed three days a week because of this decreased use. The reading room at Multnomah, however, was enlarged due to its increased use.

As part of a branch survey, a 1949-50 library committee studied changing conditions outside the city boundaries. The 1950 annual report notes:

Located in Multnomah, a thriving business center, and the largest community to the southwest, is the most active county station. Population is growing steadily, and readers come from some distance. When possible, facilities at Multnomah should be expanded, developing into a full-fledged branch. However, the move should not be made too hastily, because the new Multnomah Boulevard, opened within the year, will influence the growth of the business center. Also, there is a new bank building on Barbur Boulevard, where a business center is rapidly developing. These two factors should be kept in mind when selecting a new library location. Outlying and isolated districts around Multnomah should have bookmobile service which would reach from the southwest through the hills to meet the present Skyline route to the north.

In October 1955, the Library Association of Portland reviewed an option to purchase property at the southeast corner of S.W. Sunset Boulevard and S.W. Dewitt Street for $12,000. In November, the board passed a motion to call the new library the "Southwest Hills Branch." In 1956, the Library Association of Portland acquired sites for two new neighborhood libraries, the Midland branch on S.E. 122nd Avenue, and the Southwest Hills branch at S.W. Sunset Boulevard and S.W. Dewitt Street. The board awarded the contract for construction of the Southwest Hills library to Norman Builders. 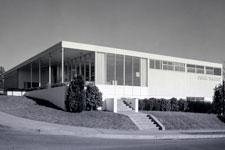 The opening of the attractive Southwest Hills branch, designed by Walter Gordon, gave the people of the county their first look at modern branch library service. It was the first branch the Library had opened in twenty-one years. The response of the area served was overwhelming. Before the end of the year, Southwest Hills was second to Rose City in circulation.

In its first decade of operation, use of Southwest Hills grew. Ten years after it opened, circulation had grown 136 percent from its first year of operations. An analysis library resource use showed that although the Hollywood library had the largest number of library users, the Southwest Hills library circulated more books per library user visit than any other neighborhood library. Additional shelving was added in the building in 1969 and 1970.

In 1986, as part of a planning process to create Multnomah County Library’s first long-range plan, "speak out" meetings were held at Central Library and in each neighborhood library. At the Southwest Hills Library session in January 1986, there was considerable community sentiment to rename the branch. In the following months, community residents circulated petitions, asking that the branch be renamed "Hillsdale." The library board agreed with the request, and a Hillsdale Library open house was held on October 25 to celebrate the new name and its new sign, which had been purchased by community residents.

In 1998, Multnomah County began an extensive public process to site a new library in Hillsdale. Numerous sites were suggested and investigated. After hearing considerable public testimony, the Board of Multnomah County Commissioners voted on November 9, 2000, to build the new library on the site of the existing building.

Schematic design began in early 2001. Plans for the new building were completed late that year, and the old Hillsdale Library closed on December 2, reopening in a small temporary facility on December 19. Construction on the new building began early in 2002 and continued through 2003. The new building used high-performance green building practices to significantly reduce the building’s negative impact on the environment while providing an inviting, friendly and comfortable place for library patrons of all ages.