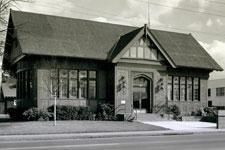 In late fall 1903, Gresham served as a location for one of three “deposit stations,” the first collections of books within Multnomah County that were housed outside the main library in downtown Portland. The other two stations, located in Bridal Veil and Fairview, each housed collections of 50 books. Gresham housed a collection of 100 books.

According to an early Library Association of Portland annual report, the Gresham deposit station “did not meet with anticipated success because of the difficulty of finding a librarian willing to give his time to it.” The deposit station closed in May 1905. Timothy Brownhill and H.L. St. Clair, editors of the East Multnomah Record, generated new community interest in the deposit station, and it reopened in October 1905.

Interest in the deposit station continued to grow and a new cooperative “reading room” opened on May 15, 1906. Community residents provided the room with heat, lights, furnishings and janitorial service; and the Library Association of Portland provided books, magazines and the salary for Miss Aida Culey, the first permanent “custodian” — the title for reading room librarians at that time. Miss Culey received the generous salary of $1 per week.

The new reading room, with a collection of 200-300 books and magazines, was open five hours each afternoon and evening. Each week, the Library Association of Portland delivered books that had been requested by reading room users in addition to an assortment of books to be exchanged. Circulation that year totaled 2,405 books. By the next year, circulation had increased to 7,029 books.

By 1912, there was considerable interest in building a library to replace the reading room, which had become inadequate. Community members raised $1,900 to purchase land for a new building on the corner of North Main Street and Fourth Street. Money for the building and furnishings — $11,568 for construction and an additional $1,757 for furniture and equipment — came from the Carnegie Corporation of New York.

The new 3,032-square-foot Tudor-style building opened on the afternoon of March 1, 1913, with Clarisse H. Haille as librarian. Book capacity in the new library was 3,000 titles; circulation that first year totaled 14, 142 books.

East Multnomah County population continued to grow in the ensuing years. By 1960, Gresham Library served a population of almost 10,000 residents. Library circulation had jumped to 46,542, and new space was needed for books. The library was remodeled at a cost of $31,558; new furniture and equipment cost an additional $10,461. New shelving enabled the book capacity to increase to 7,000 volumes. The library celebrated its new space with an open house on December 7, 1961. In the year after the expansion, library users checked out 74,826 books.

Throughout the 1970s and 1980s, the population continued to increase. Gresham became the fourth largest city in Oregon. By the mid-1980s, the library housed a collection of 25,000 books and had an annual circulation of more than 220,000 items. The historic Carnegie building was bulging at its seams. A ballot measure, passed by voters in 1987, authorized $1.7 million for construction of a new 20,000-square-foot building.

In early 1989, a site at the corner of N.W. Third Avenue and N.W. Miller Street was purchased for the new library building. Groundbreaking was held May 15, 1989, and construction began immediately. Dedication of the new Gresham Library occurred on January 7, 1990. Circulation in the first year increased to 712,229 volumes.

In May 1996, Multnomah County voters passed a $28 million general obligation bond measure to renovate deteriorating branch libraries and to improve technology in all branch libraries.

Physical and functional analyses of Gresham Library showed it to be in good physical condition, except for the cabling and wiring needed to increase the number of Internet-capable computer stations. Gresham's 1990 infrastructure supported two computer stations; in comparison, the new Midland Library, completed in 1996, supported 40. A portion of the bond money was earmarked for improving technology at Gresham Library. Other improvements included a reconfiguration of the workroom to allow staff to shelve books more efficiently, and upgrades to meet current seismic and Americans with Disabilities Act codes. 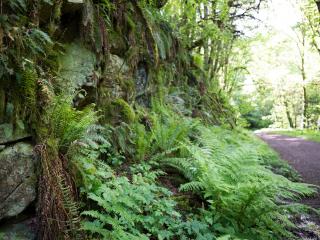