Library service in Fairview began in late fall 1903, when, at the request of the Civics Improvement Club of Fairview, Mr. H. M. Mathewson received a case of 50 books from the main library in downtown Portland for display in his store. This “deposit station” was one of the first collections housed outside the main library building. The other two stations were in Bridal Veil and Gresham. Bridal Veil had a 50-book collection; Gresham, 100. New selections of books were regularly sent from the downtown library to refresh these two book collections.

In 1905, the name of the Fairview Deposit Station was changed to Cleone, but Mr. Mattewson continued to provide a conspicuous place in his store for this service. The books were “drawn for home use” 125 times that year, according to the librarian’s report, which notes that “…this is no index to the number of times they were read, as the store is practically the reading room for the district.” The collection included general interest titles, farming handbooks, cooking and craft books, classic novels and the best of new fiction.

By 1910, the deposit station was one of 16 throughout Multnomah County, each boasting an average of 481 books read each month. In 1912, it moved into City Hall, using the name Fairview Deposit Station. The Library Association of Portland agreed to pay $2.50 per month for use of the room.

Rural east Multnomah County continued to grow. On March 1, 1913, the Gresham Reading Room moved into a new 3,032-square-foot, Tudor-style building with librarian Clarisse H. Haille in charge. The grand opening drew people from as far away as Pleasant Home, Rockwood and Fairview.

The Fairview Deposit Station was closed in the summer of 1915 and arrangements made for the Gresham Reading Room librarian to serve the area. Miss Haille visited Fairview Village every Wednesday to hold a children’s storytime and to give out books from 5-7 pm. Each week, 10 to 15 children attended the storytime, and community members checked out 20 to 30 books.

Throughout the 1970s and 1980s, the construction of new housing and commercial developments brought increased population and industry to east Multnomah County. By the mid-1980s, the old Carnegie Gresham Library building, which served the entire area, bulged at its seams. It was replaced by the Gresham Regional Library in 1990.

Fairview-Columbia Library, named by the community library committee, opened on November 13, 2001. It was Multnomah County’s first mixed-use library building, housing the library on the ground floor and four market-rate apartments above. 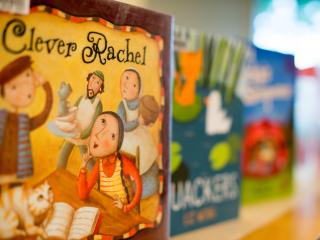