Let’s read, reflect and learn together. Everybody Reads is a community-wide project that promotes shared reading and discussion around a single book.

Ruth Ozeki’s award-winning novel A Tale for the Time Being tells the story of two strangers whose lives become connected across time and an ocean.

Ruth is a novelist living on an island off the coast of British Columbia. While beachcombing, she comes upon a Hello Kitty lunchbox washed ashore, detritus from a tsunami in Japan. Inside, she discovers the diary of 16-year-old Nao Yasutani of Tokyo.

Ruth becomes absorbed by the drama of Nao’s life and her unknown fate.

In Tokyo, Nao is the target of her classmates’ bullying, and she struggles with a pervasive sense of loneliness. Increasingly, her thoughts turn to suicide, but she doesn’t want to leave the world until she has written the story of her beloved great-grandmother, a Buddhist nun who is over a century old.

Ruth Ozeki is a novelist, filmmaker and Zen Buddhist priest. Her books have garnered international acclaim for the way they integrate issues of science, technology, religion, environmental politics and global pop culture into unique hybrid narrative forms. She has written four novels and one work of nonfiction. A Tale for the Time Being won the L.A. Times Book Prize and has been published in over 30 countries.

More recently Ruth Ozeki won the 2022 Women’s Prize for Fiction with her fourth novel, The Book of Form and Emptiness. 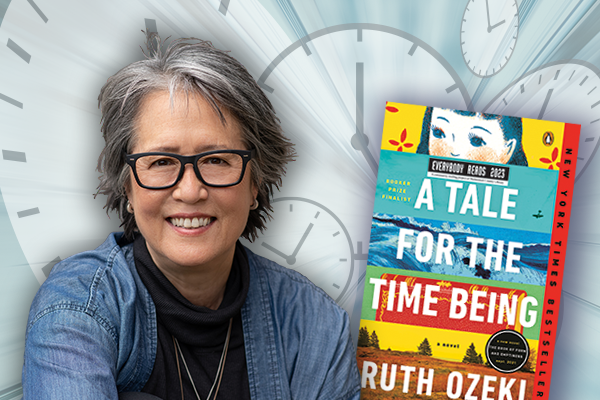 Check out A Tale for the Time Being from the library.

Find copies of the book at neighborhood libraries and online, thanks to the generous support of The Library Foundation. The library encourages readers to share extra copies with friends, coworkers and neighbors.

Discuss, learn and be inspired.

Explore the themes of the book through events and discussions. See Everybody Reads project guide and events.

Everybody Reads will conclude with “An Evening with Ruth Ozeki,” on Thursday, March 16, 2023 at 7:30 pm.  Tickets are available from Literary Arts.