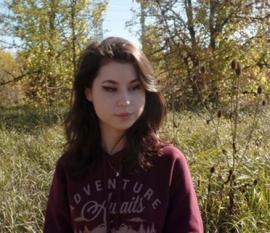 Chloe McCann, search assistant at Fairview Library, has been volunteering at that location for almost as long as that neighborhood library has been in existence. Ok, that’s a slight exaggeration, but in reality Chloe has “been going [to Fairview] as a patron since I was a toddler, since Fairview opened three months after I was born.” Once she got a bit older, Chloe’s mother suggested she volunteer for the Summer Reading program, and she’s been active with Fairview ever since. As a paging assistant three days a week, Chloe fulfills holds for patrons from other libraries and does other tasks like reading shelves. “I make sure everything is in its right place,” she says. “I love the paging list,” she adds with a laugh, “It’s satisfying to be able to pick stuff out and find things!”

When not volunteering, Chloe is a full-time student at Mt. Hood Community College, working toward her diploma even though she is only eighteen. Chloe says she’s surprised that her volunteer work hasn’t steered her toward a library science degree, but she is interested in pursuing psychology and neuroscience, subjects she’s loved since she was little.

Music and books fill the small amount of free time Chloe has. “I love music and over the course of my life I’ve learned to play about fifteen instruments. I’ve played piano on and off for eleven years.” Her reading interests veer toward psychology and nonfiction, but she also enjoys “horror, mysteries, thrillers, and graphic novels.” She also admits to judging a book by its cover, in a sense: “If a book has a cool cover, I’ll check it out,” she laughs.

Over time, Chloe has become close to her Fairview co-workers, whom she justifiably calls “family.” “I’ve known [staff member] Angie since I was a little kid,” she says. During her summers Chloe also interns at Fairview, which means, “I get paid to be around family!” Fairview is lucky to have such a long-time volunteer on its hands, especially one who’s been among its books since childhood. “I’ve always loved libraries,” Chloe says, “and being at Fairview is not like going to a public place, it’s like a second home.”

A few facts about Chloe

Favorite book from childhood: Any of the Dork Diaries books

Favorite section of the library:  Non-fiction or graphic novels!

Guilty pleasure: Reality shows, even if they're fake.

E-reader or paper? Paper! E-readers are really convenient but I personally like to have an actual book.

Favorite place to read: Outside