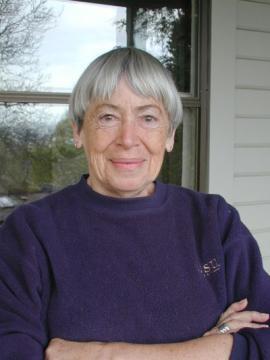 When I learned of Ursula Le Guin’s passing, my world stopped spinning for a time. I reflected on her influence with a mixture of gratitude, admiration and awe. Ursula’s contributions to libraries, reading, literacy and to our community are immeasurable. She was tenacious, principled and gracious beyond words.

I first read The Left Hand of Darkness as a graduate student in library school, enthusiastically exploring my early feminist righteousness. Ursula Le Guin was a beacon to me then. I would have never imagined that, decades later, I would pass a lovely Portland winter’s afternoon in her home sipping tea, chatting about her life, career, ebooks, politics and her love of Multnomah County Library.

And, oh how Ursula put her library love into action! She was a deep and genuine friend to Multnomah County Library. She offered a list of her favorite works. She was a singular voice in support of issues that matter. She served on the Multnomah County Library Advisory Board in the 1990s, and she shaped how our library addressed issues that are important today. She leaves an impressive body of work, and she remains one of our library’s most popular authors.

For decades, Ursula Le Guin offered Multnomah County Library her unwavering support. She spoke, wrote and acted in support of library funding at every turn. She celebrated our milestones (even writing a poem celebrating Central Library’s reopening in 1997). She took on pivotal issues and daunting opponents: advocating for the rights of authors and artists; affordable library access to ebooks; and the importance of a person’s fundamental and constitutionally protected right to read, think, and pursue knowledge without scrutiny or constraint.

In her 1997 remarks about Central Library, she said, “A library is a focal point, a sacred place to a community; and its sacredness is its accessibility, its publicness. It’s everybody’s place.”

Of the many wonderful memories I have as director of Multnomah County Library, that gray afternoon with Ursula Le Guin is one of my most treasured. I will be forever grateful to have encountered her. May we honor her legacy by embodying who she was and what she stood for, in our own lives and communities.

I too had the good fortune to spend some time with Ms. le Guin. She was everything I had ever hoped for. I spent time right after I moved here at a long-gone downtown bookstore where she spent time talking about her translation of the Tao te Ching. She cemented the idea that Portland would be my home, since it had such wonderful people as her in it. The world is made the richer when we do what those we respect did, and champion causes that bring us together, and lift us up.
i had the privilege of meeting Ursula le Guin when she attended Oregon Historical Society's book fair at their annual Holiday Cheer. I had read the book her mother wrote about Ishi the Native American who was the last of his tribe, "Ishi in Two Worlds." It made a lasting impression on me and I read a lot about it. Her father was a professor at UC Berkeley and he helped Ishi to record his language and to live and work until the end of his life. It was a great moment. Afterwards I read it again and also read many of her works. Powells books quoted her in their Memorial posting, "It is good to have an end to journey toward, but it is the journey that matters in the end." thank you Ursula le Guin, you will be missed.
Thank you so much for this thoughtful remembrance. May she Rest In Power!
She was definitely a local treasure. Thank you for sharing a bit about the impact she made on your life and in our community!
Is sipping tea a code for something?
I really appreciate this blog. What struck me deeply today is Ursula's talking about how the public library is sacred: sacred space, sacred institution, sacred respect for our needs and rights for our minds.
Please read Maria Popova's blog about Ursula K. Le Guin. https://www.brainpickings.org/2018/01/24/ursula-k-le-guin-spare-time/