In November of 1943, my Dad joined the US Navy at the age of 18. After basic training in San Diego and electrician training at Kansas University in Lawrence, he was assigned to service aboard an attack transport ship. He has often made light of this assignment, likening the captain and crew to that of the 1960s comedy McHale’s Navy. Sure, there were ships that experienced combat more directly. But just being in the South Pacific during those years left one under continuous threat of enemy attack. For instance, his ship once had to take evasive action to avoid hitting a mine; they fought off a kamikaze attack; and on April 1, 1945, his ship was one of the first ships in to debark troops for the final major battle of the war -- Okinawa. I’ve always been very proud of my Dad and his service to our country. 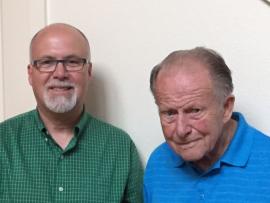 So August marks the 70th anniversary of the end of World War II. Although it was thought that the war would only end with an all-out invasion of Japan, Iwo Jima and Okinawa ended up being the final fights with men against men; this was, of course, because of the atomic bombs being dropped on the cities of Hiroshima on August 6 and Nagasaki on August 9.

Interested in reading about the closing days of the war? Here is a list of books on the two final battles and the catastrophic events that brought the war to a sudden end.

Thank you for the reminder that war is more than headlines, it is the lives of everyday men and women.