Peninsular Station provided the first public library service for North Portland’s peninsula neighborhood beginning in October 1903. This “deposit station,” one of 11 locations first established in Multnomah County, provided a small collection of books in a location other than the main library building in downtown Portland. According to the Library Association of Portland’s 1904 annual report, “Thirty-three books were sent to Peninsula in October in charge of the school superintendent, Mr. E.J. Steele. Owing to pressure of school duties, these books were not made accessible until recently and only 14 have circulated.” Use of the book collection did not increase, and the station was discontinued early in 1905. 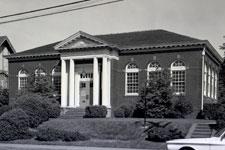 In 1907, five “reading rooms” opened in various Multnomah County locations, including the St. Johns area. The 1908 annual report describes them:

The reading rooms have proved an economical and effective method of book distribution. They are maintained by the cooperation of the residents of the locality with the library, the former providing the room heated and lighted, while the library is responsible for the salary of the custodian and furnishes the books and magazines. The rooms are open for five hours during the afternoon and evening and in addition each custodian is required to spend one morning each week at the central library for instruction and suggestion. A small group of reference books has been placed in each room and between 200 and 300 circulating books. These are kept fresh by weekly exchanges and a weekly delivery of books specially requested supplements this deposit collection.

The Peninsular Reading Room opened on April 27, 1907, with Mrs. Frances Rhomberg in charge. The first year’s circulation totaled over 3,000 items. Membership grew in the next year, and circulation increased to more than 8,000 — the second highest for all of the five reading rooms.

By 1911, enthusiasm for a St. Johns branch had increased. The Library Association of Portland’s 1912 annual report states that on May 1, 1911, “a sub-branch was opened at St. Johns, which has met with unusual appreciation.” Miss Mabel Rundall was St. Johns Library’s first librarian.

In 1912, W.B. Ayer, Library Association of Portland president, wrote, “it is my pleasure to announce to you the gift of $60,000 from the Carnegie Corporation of New York for the construction of four additional branch library buildings; also the gift of three sites for branch buildings, having a total value of $18,000…the one [site] at St. Johns was the generous gift of Mr. M.L. Holbrook.”

A period of growth in the library system followed. Branches opened all over Multnomah County, some with the support of Carnegie funds, and others that were placed in rented spaces. According to Katherine E. Anderson’s Historical Sketch of the Library Association of Portland, 1864-1964:

The war years, 1914 – 1918, which followed closely the period of rapid expansion, brought many changes and created new problems. Military personnel and war workers pouring into the community introduced new and greater demands on the book collection at a time when book prices and all other expenses were rising at an appalling rate. As always, in time of national stress, experienced employees at all levels were lost to other areas of war effort, leaving a reduced staff to cope with the greatly expanding activities.

A baby clinic opened in St. Johns Library in 1918, and continued operating, except during the war years, until the 1950s.

Circulation in all library locations increased during the 1920s due, in part, to the period of unemployment following the war. Anderson notes, “…the demands upon the library were heavy and unremitting. There was no need to publicize or promote library services. Reading rooms were crowded and shelves almost devoid of books…”

Circulation continued to increase during the 1930s. Anderson states:

The early thirties, the depression years, were probably the roughest that the library had to weather in its often-troubled existence. Enforced leisure for a large segment of the population turned any of them to books and reading, some seeking new ways to earn a livelihood, some for self-education when formal study had to be discontinued, and some to pass the otherwise empty hours. During the first two years circulation soared to a figure unequalled again for thirty years.

The Peninsula has probably experienced as much change in the past year as any district in Portland. Not only have the shipyards sprung into existence practically overnight, but St. Johns’ own industries, the woolen mills, the cooperage, and the lumber mills, have enjoyed an increase of business.

During the early years of World War II, libraries served a variety of patrons, including immigrants and others who moved into the area to work in the shipyards. Also during the war, the Ration Board operated out of St. Johns Library. Anderson notes:

At the registration desk foreign names and speech were encountered with increasing frequency, and uniforms, military and civilian, together with shipyard coveralls outnumbered ordinary civilian garb…No less important was the normal day-by-day service to students, to the families of service personnel, to the dislocated peoples, American as well as foreign, who had moved into the community for refuge or to work in the shipyards.

As the war continued, it became harder to recruit and retain staff for the branch libraries. Due to lack of staff, branches were closed certain days each week. The loss of book circulation in closed branches was notable.

In 1953, new Library Association of Portland Director Bernard Van Horne began developing a long-range plan for library development. Following the national trend, he planned to have fewer but larger branches in some areas of Multnomah County. A new main branch was designated for the Peninsula. Van Horne’s 1956-57 annual report states, “The program of essential work for the future includes: … Replacement of University Park and St. Johns with a modern, adequate building.”

However, by the mid-1960s, it was clear that the St. Johns community did not favor replacing the smaller branches on the peninsula with a large branch library, so plans for a larger branch were abandoned.

Beginning in the early 1970s, budget woes dominated the library’s activities. Funding for the library was erratic; some years offered relatively stable operations, while others brought reductions in hours of operation, hiring freezes and branch closures.

In 1985, under the direction of newly hired Library Director Sarah Ann Long, the Library Association of Portland concentrated its energy and resources on long-range planning for future library service. Goals and objectives focused attention on several programs, including library buildings. St. Johns Library was refurbished as part of this program, and the renovation featured a new ramp for people with disabilities.

In May 1996, Multnomah County voters passed a $29 million general obligation bond measure to renovate deteriorating branch libraries and improve technology in all branch libraries. St. Johns Library was one of four branches designated on the ballot to receive special attention.