It is the 41st millenium. For more than a hundred centuries the Emperor has sat immobile on the Golden Throne of Earth. He is the master of mankind by the will of the gods, and master of a million worlds by the might of his inexhaustible armies ... Forget the promise of progress and understanding, for in the dark, grim future there is only war. 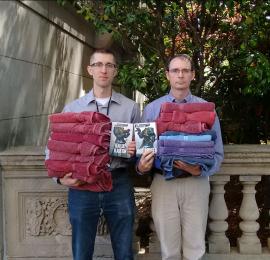 Thus begins every Warhammer 40,000 novel. In an infinitely vast universe in which anything imaginable--as well as anything not imaginable--exists, the deathless emperor of humanity watches over his domain. There are over 350 books set in the Warhammer 40K universe so it only seems appropriate that it be included in that most remarkable of all books, The Hitchhiker’s Guide to the Galaxy. Not wanting to actually endure the violence inherent in the Warhammer universe, intrepid Hitchhiker’s Guide contributor Ford Prefect has come to Multnomah County Library to find out what it’s all about and why you need plenty of dark towels when you visit. He interviewed Rod and Ross, reference staff at Multnomah County Library who have been exploring the Warhammer 40K universe--through books, of course. There are a couple reasons why they chose books: 1) neither has access to a starship and 2) both are quiet, gentle souls who would last approximately 8.6 seconds in your typical Warhammer 40K setting before suffering some grisly end.

Ford: What is Warhammer 40,0000?
Rod: Well, it’s a universe 40,000 (40K) years in the future where humanity has spread throughout the galaxy. The peak of human technological development 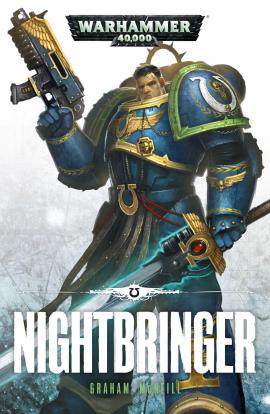 occurred centuries before, so most aspects of life are treated like a religion because there is no longer any real understanding of how things work.
Ross: This futuristic version of our universe was first depicted in a tabletop wargame created by the British company Games Workshop, but novels and short stories by various authors have been steadily produced over the last 30 years, such that there is now an enormous body of literature all taking place in this same grim, dark future.

Ford: How did you discover this future reality?
Ross: I first discovered Warhammer 40K as a kid through the board game Space Hulk. The game was okay, but mostly I was just fascinated by the enormous scale and dystopia of the setting and the cool looking Space Marines in their power armor. When I got older and discovered all the books set in this world, I was a little intimidated and unsure where to start reading.
Rod: Yes, “intimidated” would describe my own thoughts when faced with the overwhelming number of Warhammer 40K books. After talking with Ross and doing a little research, he and I decided to dive in and create our own list of places to start reading in Warhammer 40K.

Ford: As any traveller of the galaxy knows, a towel is the one necessity that cannot be done without. Its uses are mind-boggling in variety. As you can see, I have this lovely towel from Marks & Spencer, but you two seem to have A LOT of towels in dark, rather drab colors. Why?
Ross: Like the intro to each Warhammer book says, “there is only war” in the year 40,000. If there’s one thing that Warhammer 40K books have in common, it’s carnage. Lots of battles, lots of cool weapons (power armor! chainswords! storm bolters!), and lots of blood. Hence, dark towels.
Rod: When starting your journey into the Warhammer 40K universe, you really need to know what you are getting into. Be prepared for gaping combat wounds, ritual sacrifices, demonic transformations--all manner of violence. Not only will you need a towel for your own injuries, but chances are you’ll be staunching wounds for everyone around you, too,

Ford: Personally, I’d much rather visit Ursa Minor Beta (you remember the ad campaign, “when you are tired of Ursa Minor Beta, you are tired of life”). This Warhammer universe sounds utterly dreadful. What could you possibly find appealing about such a dark, violent place?
Ross: Hmm... there’s something cathartic and freeing about visiting a world (through books, that is) which is so bleak and brutal. And there’s more to these novels than just unceasing violence: I get a strong sense of absurd, very black humor when I read them. They are violent, funny, and so completely over-the-top that you never know what will happen next.
Rod: I didn’t sense much humor in the books I read, but you definitely can’t take them too seriously. These are novels built around action. While individual books don’t always bother much with such niceties as plot and character, the overall universe is remarkably deep. One of the nice things about such a large catalog of books is that there are many different series within the larger universe and many different authors, so if you aren’t a big fan of one, then another might be just the thing for you.

Ford: Well, thank you gentlemen for your insights into the Warhammer 40K universe. I think I already have my entry written. What do you think of “Mostly harmful”?

The hitchhiker's guide to Warhammer 40,000

In the future, there is only war. (FYI: bring some towels.)

YESSSSSSSSSSSSSSS. Two of the most satisfying, immersive pieces of work I've read. You are so cool. Nice job, everyone.