This guide is a tool to enhance your group’s conversation about Americanah, Chimamanda Ngozi Acichie’s insightful story of a young love, migration, exile, and homecoming.

1. Adichie is herself somewhat of an outsider in America, as is her character, Ifemelu. Is there an advantage to telling this story from an outsider’s perspective?

2. In an interview with the New York Times, Adichie said she thinks there is “a tendency in American fiction to celebrate work that fundamentally keeps people comfortable.” How does Adichie reject or embrace keeping the reader comfortable in Americanah?

3. At the Frankfurt Book Fair, Adichie commented on likable characters in fiction, saying, "women writers are expected to make their female characters likeable, as though the full humanity of a female person must in the end meet the careful limitations of likability.” Did you find the characters in Americanah likeable? Why or why not? Are there some characters you liked more than others? If we demand likeable characters, what does this need say about us as readers?

4. The first part of Ifemelu’s story is told in flashback as she's having her hair braided at a salon before returning to Nigeria. Ifemelu interacts with the women in the salon, and makes judgments about them. How does her identity and her long stay in America affect her perception of the women around her?

5. In Americanah, hair is often a focal point for discussing race and culture. Re-read Ifemelu’s blog post “A Michelle Obama Shout-Out Plus Hair as Race Metaphor (p. 299.)”  How does the attention and judgment paid to a woman's hair reflect American society’s greater issues with race and feminism?

6. Ifemelu says, “I discovered race in America, and it fascinated me (p. 406).” She wonders, “How many other people had become black in America?” (p. 209) What does she mean by these statements?

7. Obinze’s has a complicated relationship with Ojiugo, his now-wealthy friend who has married an EU citizen. How does Obinze balance the need for support from his friend with the sense that Ojiugo represents someone who has given up his cultural identity?  Are all of the characters who leave Nigeria (such as Emenike, Aunty Uju, Bartholomew, and Ginika) similarly compromised?

8. When Ifemelu is hired to speak on race relations in America, she gets a hostile reaction at first. She changes her presentation to say, “America has made great progress for which we should be very proud”, and gets a better reaction; however in her blog, she writes “racism should never have happened and so you don’t get a cookie for reducing it’.” (p. 378). How do these two approaches reflect how Americans navigate questions of race and bias? Within your own circles, are you able to have frank conversations about race?

9. Kimberly, the white woman who employs Ifemelu as a nanny, seems to exemplify the white liberal guilt many Americans feel in relation to Africa and Africans. How did you respond to this character and her relationship with Ifemelu?

10. Ifemelu’s experience with the tennis coach is a low point in her life. Why does she avoid being in touch with Obinze afterward (157–58)? Why doesn’t she read his letters? How do you interpret her behavior?

11. How would you describe the qualities that Ifemelu and Obinze admire in each other? How does Adichie sustain the suspense about whether Ifemelu and Obinze will be together until the very last page? What, other than narrative suspense, might be the reason for Adichie’s choice in doing so? Would you consider their union the true homecoming, for both of them?

Celebrate the work of Chimamanda Ngozi Adichie with these stories of Nigeria and the African diaspora. Everybody Reads, a community reading project of Multnomah County Library, is made possible in part by The Library Foundation with author appearance made possible by Literary Arts.

The outsiders perspective is both relevant and urgent to current race discussions in America. 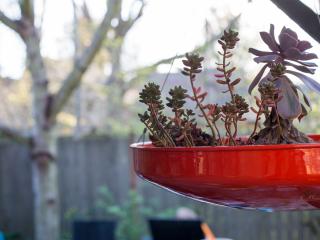