What images come to mind when you think about the Vietnam War?  Napalm explosions? Monks setting themselves on fire?  Jungle camouflage and booby traps?  Vietnam Vets waving protest signs and shouting?

Wait, what?  Soldiers protesting  the war? That can’t be right, it was the radical college students and long haired hippies that protested the war, right? Not according to  Jerry Lenkcke in his thought-provoking book, The Spitting Image: Myth, Memory and the Legacy of Vietnam.

While doing research about the way society viewed the returning Vietnam vets, Lenkcke kept coming across the mention of soldiers getting off the plane on American soil and being spit on by anti-war, anti-draft protesters. Intrigued, he decided to find the source for this image - was it symbolic or did it really happen?  Could he find an example of it?

What he discovered kept me enthralled. I don’t think I will ever look at a picture of a soldier the same way again. 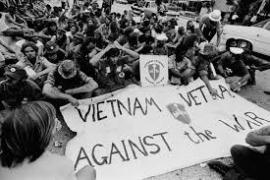 The book is well-researched, documented and supplemented by a complete filmography. If you are interested in how the media changes the way that we see the world, read The Spitting Image: Myth, Memory and the Legacy of Vietnam by Jerry Lenkcke.

Thought-provoking books about the way that our minds are shaped by what we see.