Our guest blogger is Memo. Memo works at the Central Library. Besides reading history and literature about Latinos, workers, and immigrants, he enjoys re-reading the great literary works of nineteenth and twentieth-century realist writers.

I had never read the literary works of Langston Hughes before coming across The Collected Works of Langston Hughes at the North Portland Library.  I knew of him as a great poet and poetry was not my favorite genre.  Nonetheless, I leafed through the seventeen volume set on the shelf and I immediately was hooked on the works of one of the literary lions of the Harlem Renaissance.

Not sure where to begin, I skimmed through the volumes on poetry.  I read quickly a few poems, tried to digest others, but it was his prose that truly beckoned me.  I paused skimming midway through his oeuvre and read the first two short tales in depth.  I knew then, as I do now, that I had found a literary gold mine because weeks later, I’m still digging through the Simple stories in volumes 7 and 8.

Originally published in the Chicago Defender from 1943 to 1965, the Simple stories read more like weekly columns on race relations in the U.S. The tales are narrated in a conversational form to engage readers on multiple levels.  On one level, the stories are comical and reader-friendly, designed to show the human soul of Jesse B. Semple, or Simple as he is known, and draw the reader in.  Readers get to see and feel Simple’s failures and successes as well as his frustrations and dreams.  On another level, the stories portray the complex world that evolved in the Jim Crow era in a non-antagonizing way.  Simple’s conversations with his bar buddy not only lured readers into the national dialogue over race, but they also engaged readers in a constructive conversation over racism—the ideological foundation that defined the racial boundaries of Simple’s life and, by extension, African Americans.

Though it has been sixty-five years since Langston Hughes published the first Simple stories in book form, the ideas in these tales still resonate.  Racial progress has been made, but we still have a long way to go.  Both fictional characters would probably nod their heads.  Yes, over a cold beer.  Still, such ideas, now more than ever, need to be part of a national discourse.

Amen & amen!..Read them for Negro History Week way back when. Must read them again, your post is intriguing.
So glad to come across more Langston readers! I have a touring one-man show on Langston titled, Soul of Langston: https://youtu.be/EexxhSC_SLY I would love to discuss any possibilities, of coming to your library and/or town. Best! Daron “Hold fast to dreams...” 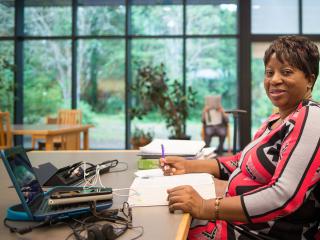