This is part two of a multi-part series on researching past residents of your Portland-area house:

House history researchers are often interested in learning who lived in their houses in the past.  In the first post in this series, we explored using city directories to find past residents of Portland houses.  But that only works reliably for 1934-present, because nearly every building in the whole city got a completely new address (and sometimes a new street name) in the early 1930s.  So, what if you want to go back further and find out who lived in your house in 1933, or earlier?  You have come to the right place!  To get started, here's a little background on old and new addresses in Portland: 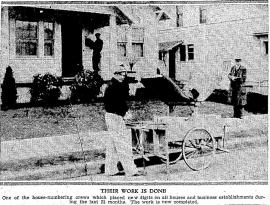 The city grew enormously around the turn of the century and each newly-added bit of land had its own street naming conventions and address numbering system.  It was rather chaotic!  In the spring of 1931, the city finally decided to act.  That summer, five-man crews began walking the entire city and assigning new addresses to every building.  Many street names were changed too.  The crews finished their work in July 1933.

This is how we got the familiar "five quadrants" that we use today: NW, N, NE, SW, and SE.  If your house was built before 1933 and you want to find its early residents, you will need to know the original address. 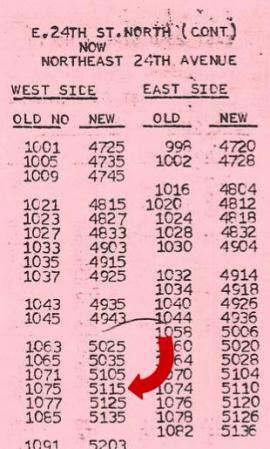 There are several different ways to track down a pre-1933 address, but the simplest is to look in the Directory of Street and Name Changes published by the Crane Direct Mail Service.  The library has two copies, both at Central Library. Ask at the reference desk in the Literature & History room on the third floor, and the librarian on duty can show you how to use it.

Here's the information the Directory of Street and Name Changes shows for the Magadanz and Schuman family houses that we looked at in the 1934 city directory, in our last blog post: 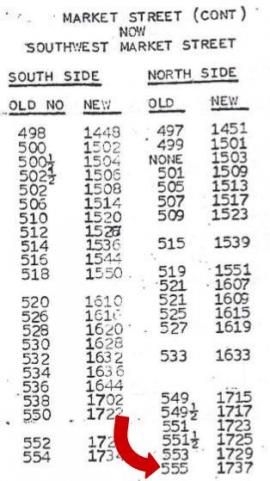 The Directory of Street and Name Changes was published in the 1930s, and meant as a tool for people who had to live through this rather disruptive change.  It shows address changes for buildings that were within the city limits at the time (remember, Portland was much smaller in the 30s than it is now -- check the Portland Bureau of Planning & Sustainability’s map of historical annexations to the City of Portland (pdf) to see when your neighborhood joined the city).  But, if your house was built before 1933, and it was within the city limits in the early 1930s, it should be included in this cross-reference directory.

Okay, what if you know your Portland house's pre-1930s address, and you'd like to find out who lived there in those early years?  If you want to know who lived in your house in 1930, 1931, 1932, or 1933, look at the Polk's Portland (Oregon) City Directories for those years – they each have a pink section in the back which lists residents by address.  General tips on using city directories are in part one of the Who lived in my house? series.  If you're looking in 1930 or 1931, use the house's older address; if you're looking in 1932 or 1933, you might have to check both the old and the new address, because some neighborhoods had their addresses changed earlier than others.

Finding out who lived in your house in 1929 and earlier

What if you want to find out who lived in your house before 1930?  That can be a challenge, because city directories for 1864-1929 don't have a section in the back with listings by address!

Here are some things to try:

Look for the names of your house's 1930 residents in directories from earlier years.  Maybe they lived there the whole time!

Check to see if the city issued plumbing or sewer permits when your house was built or modified – these sometimes list the owner's name. You can see some early permits by looking for your house in the city's property information database PortlandMaps – type in your address, then click on the "Property" tab, then on the "Historic permits" tab.  (Portland's Development Service Center has more complete historical permit records, so visit their office in downtown Portland if you'd like to dig deeper.)

Search the library's Historical Oregonian (1861-1987) database for your house's pre-1930s address to see if you can find news articles, rental or real estate advertisements, or funeral notices from early issues of the Oregonian daily newspaper that reference your house.  The Historical Oregonian can be a tricky database to search, so here are some tips:

If you are only interested in a limited range of dates, set your search to those dates by clicking on the "Dates and Eras" tab and typing in the years you need.  For example, if your house was built in 1913, you might limit your search to 1913-1932, the approximate date the new Portland address system was finalized.

Type your house's pre-1930s address in with quotation marks around it, like this:

Now you have some basic tools for finding your house's pre-1930s address, and for tracking down residents from the early 30s and before!  To get a refresher on using city directories to find out who lived in your house from 1934 to the present, take a look at part one of this series, and stay tuned for the next installment: Who lived in my house? Houses that are (or were) outside Portland.

Have fun researching the history of your house; and as always, be sure to ask your friendly librarian any time you have questions, or whenever you'd like help with a research project!