I’ve wanted to write a little something about Roald Dahl for a long time.  Yes, everyone knows him for his children’s books: Charlie and the Chocolate Factory, James and the Giant Peach, The Witches, and Esio Trot seem to always have a permanent place on the bookshelves of many young readers.  Yet there is more to Dahl than his beloved children’s books.  His short stories for adults are among the best around. They are highly original, deeply engaging and filled with unusual characters who stand out from the ordinary but seem strangely familiar.

The titles of Dahl’s stories suggest something of the intrigue to come.  Someone Like You and Lamb to the Slaughter, which can be found in his Collected Stories, suggest stories filled with unexpected twists and dark humor and they never fail to deliver both. In Lamb to the Slaughter’s title story, a disgruntled wife kills her husband with a frozen leg of lamb and then feeds the roasted meat to the investigating policeman. In The Landlady, an unsuspecting traveler falls prey to a landlady who prefers stuffed guests. Dahl’s dark and often macabre stories are beautifully written and always contain at least one moment of absolute surprise that pulls the rug out from under the reader’s feet.

Dahl has been around for the long time, rising to eminence long before J.K. Rowling and writing before the days when series fiction was needed to draw young readers in.  Roald Dahl appeals to children because he takes them seriously and endeavors to treat them well.  Dahl created worlds where magic lived just along the edges of ordinary life and where a shove in any direction would turn that life upside down.

Dahl’s personal life was filled with its own share of the unexpected. His autobiographical books including Boy and Going Solo detail his early school days

through his wartime service as a fighter pilot. After being shot down, Dahl eventually landed a post working in Washington D.C. at the British Embassy where he hobnobbed with Ernest Hemingway and Martha Gellhorn and played poker with Harry Truman. He also met C.S. Forester who encouraged him to write. Dahl started with short stories and magazine articles and eventually branched into his well-known children’s books and often overlooked adult works.  Roald Dahl’s stories are the kind that can be read over and over.  Lucky readers will discover new and exciting details with each reading.
carolg | ju., ago. 27, 2015
adults, read, listen, watch 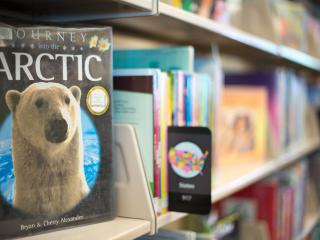