If you’ve checked out a copy of George by Alex Gino recently, you might have noticed some changes to the cover. Many of the covers have been altered to change the title from George to Melissa’s Story. This was done in response to a blog post from the author encouraging readers to engage in #SharpieActivism. That is, to alter the covers of their book to the title Melissa’s Story to reflect the gender identity of the main character. In the post, Gino (who uses they/them pronouns) talks about the importance of using a person’s preferred name and that they regret using Melissa’s birth name as the title. They go on to share their experience of growing up nonbinary and the message that something as small as a book title can send.

Over the past several months, the Online Teen Council set to work on the library collection. Equipped with washi tape and colored Sharpies, the teens altered approximately 60 copies of the book in English, Spanish, and Books on CD. The results were rich and varied. Some were as simple as crossing out the old title and adding the new. Others were ornate. Some of the titles had been altered even before the project began. The teens brought their individuality to the project, as I’m sure Gino intended. 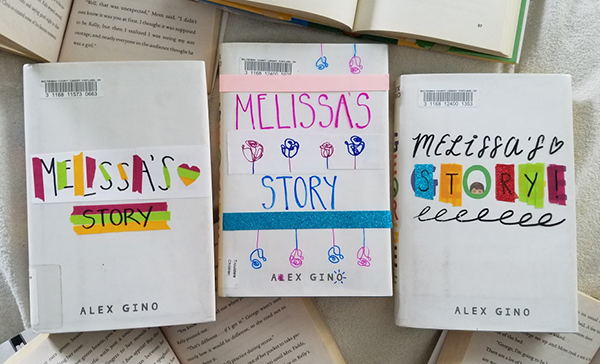 On October 22nd, 2021, Scholastic announced that they have changed the title of the book to Melissa. The book will be printed with the new name starting in April 2022. In the meantime, you can visit Alex Gino’s blog for printable covers and to order stickers. Or else you can engage in your own #SharpieActivism.