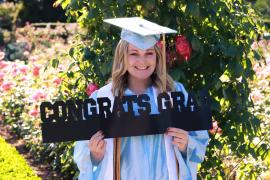 “Without her, I don’t think I would have done everything I needed to do,’’ Newgaard says. “I was always second-guessing myself. And she was like, ‘You can do it! You can do it!’ ”

Now Newgaard is taking her first college classes, starting this month at Portland Community College Sylvania Campus in Southwest Portland. She says she’s pursuing an associates degree in applied science, and with an interior design focus.

“I’m so nervous,’’ Newgaard says, her voice a mix of accomplishment and anticipation.

She’s succeeding, in part, by staying the course: working with library staff and volunteers that helped keep her GED goal in sight when libraries were closed in mid-March. Growing concern over COVID-19 infections required the drop-in, volunteer tutor-based GED program to pivot from in-person sessions at libraries to a largely Zoom- and phone-centered virtual format, Latimer says.

The program is part of the library’s adult literacy offerings, which aim to meet wide-ranging literacy needs of marginalized adults, fill gaps in community resources, and engage a diverse community. Support includes GED exam tutoring in math, social studies, science, and language arts. Prior to library closures due to COVID-19, the GED program operated out of Central, Gresham, Midland, North Portland, Rockwood, and St. Johns libraries. These branches serve higher proportions of Black, Indigenous, and People of Color, as well as immigrant communities.

Tutoring is an essential bridge to the critical next step of passing four tests to obtain the General Education Development certificate. To this end, Latimer says, students have benefited from a $16,000 grant that helped fund Latimer’s position and vouchers provided by the library to cover the costs of the tests. The library also pays the $6 practice test fee, she says.

“It’s a big part of why people come to the library’’ for tutoring, Latimer says.

“If they are working on it on their own, the tests are $38 each. And, at minimum, they’re going to take each of the four tests to pass. So, that is $152, at minimum, because people frequently need to retake a test.’’

Latimer teams with Lisa Regimbal, Multnomah County Library Adult Literacy Coordinator. She connects tutors and students, and paired Newgaard with tutors that helped her through the program.

About 100 participants completed orientation over the course of the past year, Latimer says, with Newgaard among roughly 35 actively involved when libraries closed. At each drop-in session before libraries closed, volunteer tutors with a variety of skills were available for patrons.

“The tutors definitely are the backbone of the program,’’ Regimbal says. “We’re able to meet the needs of many more learners because the tutors willingly give their time.’’

Regimbal says the program currently is supported by about 20 tutors, their commitments ranging between two and six hours a week. The consistent participant numbers underscore the program’s ability to adapt during the pandemic, with library buildings not yet open to patrons due to COVID-19-related physical distancing and other safety protocols.

“People have come to a point of acceptance that this is going to happen for a long time,’’ Latimer says, referring to the ongoing worldwide pandemic and many resulting lifestyle changes, including at work and home.

They include tutors, too, such as Jerry Hanson, a retired high school math teacher and tutor for three years. He says he’s tutored 10 hours a week since spring, and finds the new arrangement more convenient than drop-in tutoring at the library.

“Doing the remote thing is actually better in some ways for some students,’’ he says, noting that the student he currently tutors works weekends. So, they connect between Mondays and Fridays. “That works because I’m really flexible with time.’’

Latimer says 28 students currently are active in the program, citing Newgaard as an example of the program as a gateway to community college and, eventually, four-year colleges and universities.

“It’s more common and accepted today than it was in the past to attend college after getting a GED,’’ Latimer says.

Newgaard’s journey to this point started in late-winter 2019, after, she says, she “stumbled across the program on a Google search.”

“I just really wanted to do it for myself,’’ she says. “I just felt ready.” Her mantra was: “I want to graduate.”

But Newgaard knew her commitment would be tested. She was working part-time, and primarily responsible for running the family household of two elementary school-aged children and her husband, who works full-time.

So, in addition to Latimer, Newgaard says, she’s been grateful for Regimbal. “I never felt like I wasn’t getting help.’’

That’s high praise from a once-reluctant-student-now-turned-GED-graduate.

“She called me a trail-blazer the other day,’’ Newgaard says, referring to Latimer. “It almost made me cry.”

That's what Socrates says, "The education is not the filling of a vessel but the kindling of a flame."
Could you send me information on how to become a volunteer tutor? I have done this previously in another city. 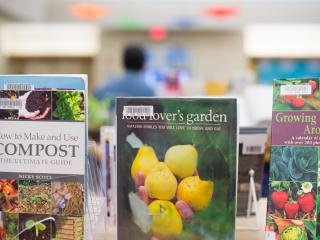