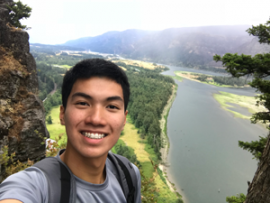 “It was a place I could call home.”

When Ben Nguyen and his family emigrated from Vietnam to Portland, one of the first places they visited was their local library. “We always came to the library because it was where my parents had access to computers. I probably rolled around in the corner and picked up picture books,” he laughs. After moving into one house with two other families, the library became “a place of refuge from the noise and crowdedness,” he says.

Since then, Ben has volunteered with the Gregory Heights Library in many different positions. For nearly five years, he has been a search assistant, gathering books on hold and sending them to other library branches. He’s always been a reader and doesn’t volunteer to gain credit: “I do it because it’s fun every week, and I love getting to see the staff.”

As a senior at Reynolds High School, Ben doesn’t have much free time, but he plays tennis on the Reynolds High School team during the year and enjoys hiking in the Columbia River Gorge. He’s also passionate about social justice and has volunteered with the Multnomah Youth Commission for the past three years. “I work with officials on the city side and figure out equity issues, like working to make public transit affordable and accessible”, he says. Through the efforts of Ben and his fellow youth commissioners, TriMet access to East County schools has increased, including a program providing free or partially-funded bus passes to students who receive free or reduced lunch at Parkrose and David Douglas high schools.

“I don’t think of social justice as a career,” he says, “but it is a passion I want to pursue later in life.” Ben also wants to support immigrant and refugee communities, since “I know how hard it is to access resources.” Even more impressively, Ben has been accepted to Stanford University and likely will start there in the fall. “I actually wrote about the library for one of my college essays,” he explains. “I talked about it as a place where my sister and I felt protected. It’s where I was able to learn English and read my first chapter book. It was a place I could call home.”

A few facts about Ben

Most influential book: 1984 by George Orwell. “It made me start engaging in current events and politics.”

Favorite section of the library: Nonfiction, especially narrative nonfiction, where he found books like Evicted: Poverty and Profit in the American City by Matthew Desmond

Book that made you laugh or cry: When Breath Becomes Air by Paul Kalanithi

E-reader or paper: “Paper because of the feeling of getting to flip the pages and remembering how much effort the authors put into their work.”

I'm staff at GRH. Ben is simply amazing!!! I have such a soft spot for him in my heart. I've seen him mature and grow over the last five years. He's an exceptional young man, and we are eternally grateful to have him on our team. Though he will be dearly missed come autumn, we all are thrilled to know he's on to forge a fantastic future. Ben is a mensch (period).