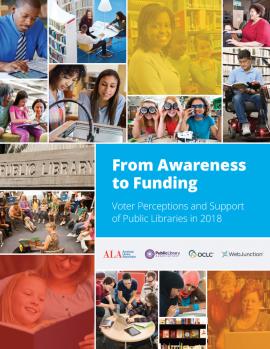 We know that for most human beings, perception is reality. For most of their existence, libraries have relied on a simple equation: If books = important; and library = books; then libraries = important. But similar to the Toys“R”Us brand, the “books are us” brand is losing its perceived value and relevance. Among other forces, both libraries and Toys“R”Us have been deeply impacted by rapidly evolving and increasingly broadly valued technology. A recent report provides some insight.

The report, From Awareness to Funding: Voter Perceptions and Support of Public Libraries in 2018 (FATF), an update to a report from 2008, was produced by OCLC Research, in partnership with the American Library Association (ALA) and its Public Library Association (PLA) division. The report’s findings are both affirming and cause for concern. They call for urgent action.

Think about our world 10 short years ago. The iPhone and the App Store, Kindle, and Netflix all launched around then–right around the time the original From Awareness to Funding report was released.

According to the recently released 2018 Tech Trends report by Amy Webb and The Future Today Institute, the next decade will bring continuing and unprecedented change, including a “new era of computing and connected devices which we will wear and will command using our voices, gestures and touch….[which] will forever change how we experience the physical world.” (p.8). It’s hard to believe that within the span of 20 years the smartphone as we know it will have come and gone. To state the obvious, the world and the communities in which our libraries exist are dramatically different than they were the year FATF was first released. And these changes are impacting the perception people have of public libraries--their value and relevance.

Given all this, it is no wonder that, according to the updated report, the perception that “the public library has done a good job of keeping up with changing technology” dropped from 60% in 2008 to 48% in 2018. And in spite of, or perhaps because of, this it is imperative that libraries continue to prioritize their role in digital equity. Where else can those among us with the fewest resources and opportunities find free, quality access to and assistance in effectively using the technology increasingly imperative for thriving in our world?

Technology’s relentless evolution isn’t the only trend to which we must constantly adapt. The demographic shifts we see demand investment to ensure that everyone has equal opportunity and access. A widening opportunity gap presents critical challenges for people who are new to this country and others who might be left in the margins. According to Pew, “by 2055, the U.S. will not have a single racial or ethnic majority. Much of this change has been (and will be) driven by immigration.” It is heartening, then, to learn that in the 2018 report there was a 10% increase in the number of participants who acknowledge that the library “provides classes, programs, and materials for immigrants and non-English speakers.”

Of concern, there was a 20 point drop in the number of respondents who are likely to see the library as a resource for children (71% in 2008; 51% in 2018). Support for early literacy and school success have long been a cornerstone of the library’s value. No doubt, technology is a factor in this shift. Not only do most folks now turn to Google and the internet for their basic information needs (including homework), but more and more people, especially youth, seem to prefer digital entertainment (YouTube, Spotify, Snapchat) over reading. According to Flurry Analytics, the average U.S. consumer spends over five hours a day on a smartphone and, from 2016 to 2017, media consumption on mobile devices jumped 43%. According to a 2015 Common Sense Media report, US teens “use an average of nine hours of entertainment media per day” and tweens “use an average of six hours a day, not including time spent using media for school or homework.”

Other findings that were hard to read, but vitally important, include a decline in respondents’ enthusiasm about library staff. There were notable drops from the 2008 findings in “having the right staff to meet the needs of the community” as well as the perceptions that staff are friendly and approachable, true advocates for lifelong learning, knowledgeable about my community, understand the community’s needs and how to address them through the public library, and have excellent computer skills. All of this likely contributed to a decline in the library’s perceived value and relevance to the community. In 2008 73% of respondents agreed that “having an excellent public library is a source of pride.” In 2018 that percentage dropped to 53%. Additionally, in 2008 71% agreed that “if the library were to shut down, something essential would be lost.” In 2018, only 55% of respondents felt this way.

It would be natural for librarians to respond to all of this with defensiveness and/or despondence. And while that’s certainly understandable, neither response is constructive. I would encourage us to assign a sense of urgency to these results. We’ve known for years that the ways in which the world is changing will impact how we do what we do. These sorts of findings provide us direction in charting our future. I think we can all agree that libraries are in an increasingly unique position to improve the lives of those we serve and build stronger, more resilient communities. How we do that may be different than it was decades ago, but it is no less important. In fact, our communities need us now more than ever. Fortunately, the percentage of respondents that agreed their local library is “a place for people in the community to gather and socialize” increased from 35% in 2008 to 44% in 2018 and more people believed that to be an important role for the library–a fact that sets us up nicely for serving as conveners and facilitators of the important conversations and connections our communities need.

Franklin Delano Roosevelt once said, “libraries are essential to a functioning democracy.” In his new book, The People vs. Democracy, Yasha Mounk writes that “over two-thirds of older Americans believe that it is extremely important to live in a democracy; among millenials, less than one-third do.” If all of that is true, then we have an obligation to ensure that America’s public libraries are strong, relevant and responsive. And we need to do the work to ensure that our communities believe they are. It’s up to us.