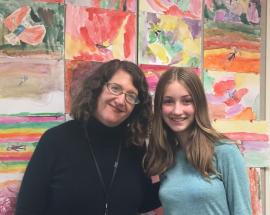 Irie Page is about to turn 14. Instead of, say, a birthday sleepover, she has planned a gift for her community, a free event featuring Mike Domitrz, the founder of the Date Safe Project and a consent educator for kids, teens and adults.  The funny, interactive presentation that he gives to teens and adults is called "Can I Kiss You?", which is also the title of his book. It focuses on how to have healthy, safe relationships and how to both avoid sexual assault and avoid sexually assaulting someone else. Her family raised money online to pay Domitrz's speaking fee, and after the story was covered on the local news, they got all the funding they needed. The event will take place at 7 p.m. on Thursday, November 9th in the Lincoln Recital Hall at Portland State University. PSU has waived the rental fees in support of Irie’s event. 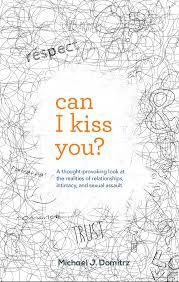 I first met this remarkable young woman at the reference desk at my library when she was just a little kid signing up for our Read to the Dogs program. We book lovers who work at the library always notice the passionate readers, the ones who leave with huge stacks of books they’re obviously eager to dive into, and that was Irie. When she was old enough, I suggested that she volunteer for our Summer Reading program, giving out prizes to kids for reading, and she brought huge enthusiasm to this as well. When she told me last summer about the event she was planning, we decided to put together a book display. Irie chose all the books herself. If you can’t get in to see the display, here’s the list.

“After I saw Malala speak, I was inspired to do something for my community,” Irie told me. She originally wanted actress and feminist Emma Watson. "That's not going to happen," her mom told her, and then suggested Domitrz. When Irie happened upon a book here at the library about philanthropy parties, her idea took off.

“I’ve always seen things in the world and thought, ‘That’s messed up. I want to change that,” said Irie. Like Malala, the Pakistani advocate for girls’ rights to education, she decided she could make a difference. She chose to start here, in her own city.

***EDITED to update Irie's story. This event was a huge success. There was so much community interest that Portland State University gave them a bigger theater in which to hold it, and it was still standing room only, with more than 500 in attendance. I took my middle school-age son and we both found it interesting and inspiring. I was delighted last week when I ran into Irie in the library and she told me she's one of two state honorees for the Prudential Spirit of Community Award. This is a very big deal! She's won $1000, a silver medallion, and a trip to Washington, D.C. At a ceremony in D.C., five national honorees will be chosen from among the state award winners. The staff at my library, who has known Irie for so long, is rooting for her to win the national award, which comes with even more honors and with cash awards for her and for the charity of her choice. We're so proud of her.