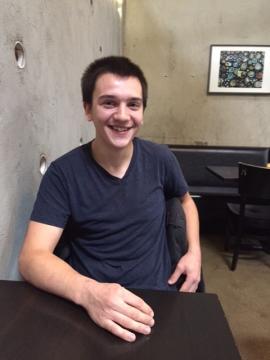 At twenty-five, Iggy Peterson has lived in many places and read many books, but he keeps coming back to Portland and the Woodstock Library. “I started volunteering there when I was 17,” he says, “but then I moved across town and stopped for a few years.” He returned to Woodstock last year and was quickly selected for a 2016 Multnomah County Citizen Involvement Award. As a search assistant (the same position he held when he was a teenager), Iggy processes a list of nearly 250 books to pull from Woodstock’s shelves to fulfill holds for patrons. “It turns out I really enjoy clerical work,” he says with a laugh. “I like that everything is in its place and that there’s a right way and a wrong way to do it.”

Before the clerical work, though, Iggy was in a bit of a quandary. Born in Portland, Iggy and his family lived in Washington state and D.C. before returning to the Eastmoreland area. Growing up, he read a lot, especially sci-fi and fantasy books, but waning interest in school and complications at home meant that he dropped out of middle school. Shortly after this, he remembers thinking, “Hey, I like books! Maybe I’ll work at a bookstore!” But then he passed the Woodstock Library and inspiration struck: he started volunteering there two days a week.

Over time, Iggy has given approximately 350 hours to Woodstock. While he works one day a week now, thanks to a full-time job, his love of books and that “clerical work” encouraged him to apply for a recent access services assistant position with MCL. “Hopefully I can get past the lottery!” he says.

When not volunteering Iggy works as a line cook at local favorite Scottish pub Rose & Thistle, reads, plays video games, and hangs out with friends. When I ask if he wants to stay in Portland he nods. “It would be hard to move away from somewhere where I’m happy,” he says. Here’s to another 350 hours at Woodstock -- and beyond!

A few facts about Iggy

Most influential book: Hard to say, but possibly The Dispossessed by Ursula K. Le Guin. “It made me think a lot. How she made an anarchist society work… it was well done.”

Book that made him laugh or cry: The Last Unicorn by Peter S. Beagle.

Favorite place to read: “My room." 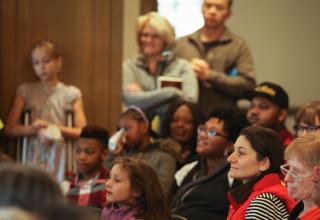