The Night Circus arrives without warning. What was an empty field by day becomes transformed by night. A city of tents appears as if by magic, drawing people through the dusk to the soft-twinkling lights and the smell of warm caramel in the air. When the guests arrive, they hardly know where to go first. One tent contains a frozen world of ice and snow all in shades of white and silver, making the visitor feel as though he has been transported into his own personal snow globe. In another a mysterious woman reads the future in her cards. In another, guests climb to the top of the tent by way of  a maze of soft clouds and, reaching the top, gently float back down to the ground.

Le Cirque des Reves showcases the purely fantastical next to the usual entertainments one might expect - the contortionists, the jugglers and of course, the magicians. What the guests don't realize is that the night circus exists only incidentally as a place to while away an evening: the circus is really a giant game-board. At its center are two young magicians, Celia and Marco, who are destined to compete in a battle to out-magic one another, a battle that will lead to the death of one.

Though Erin Morgenstern's book is already in high demand, it is well worth the wait. The Night Circus is a delectable treat of a novel, a fantastical, almost architectural dessert that is almost too beautiful to eat, but you won't be able to resist. 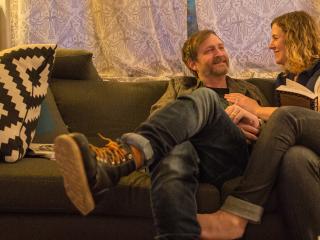