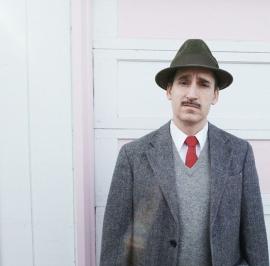 I've always felt I belonged to another era. As a child I would stay up late Friday nights to watch old serials. Buck Rogers, Flash Gordon and Terry and the Pirates became my heroes. This led to scouring the local library for similar books. I discovered the pulps, with their fantastic cover art and stories of danger and adventure. As a scrawny and awkward kid I was often bullied at school, and books were my refuge, a place to which I could retreat and explore different worlds and times. Books, history, art, and my ideation of tough guy heroes led me into the very real world of tattooing. I've been a tattooist for nearly 25 years, and I am an expert in both the artistry and history of my craft.

As the father of four homeschooled children, books still play an active role in my life. As a family, we have traveled to Reichenbach Falls to visit Sherlock Holmes' place of death, to King's Cross Station where Harry Potter boarded the train, and followed the pioneer trail of Laura Ingalls Wilder. My family continues to plan trips based on our favorite characters, historical or fictional.

This book is a veritable who’s who of pulp fiction, early science fiction and horror. It’s such fun while reading to see cameo appearances of other authors and artists: Walter Gibson, Heinlein, Lovecraft and more become characters in the story.  This book has it all — daring heroes, heroines, military intrigue, cliff hangers, and even a Chinese warlord anti-hero. This book takes me back to a time that never was. (Best read on the floor with a crème soda.)

Falcons of France by Charles Nordhoff and James Norman Hall

This book follows a young airman’s journey though the war, from learning to fly, to fighting, and becoming a prisoner of war, to shortly after the armistice. While the book is fictional, the events described are true and are derived from the author's experiences. Hall himself had a career that reads like a pulp novel come to life. He fought in the trenches for the British in the early days of WWI, before joining the Lafayette Escadrille, a squadron of Americans flying for France. The 2006 movie Flyboys was based on this squadron. After fighting under three different flags he began a writing career with Charles Nordhoff, another American who flew for France. Together they wrote The Lafayette Flying Corps, then went on to write The Mutiny on the Bounty trilogy. This book gives us a snapshot into the time and experience of young fliers in WWI as only they could tell it.

The Electric Michelangelo, by Sarah Hall 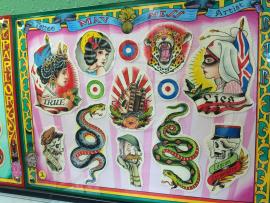 This story about an English tattooist working in Coney Island takes place during tattooing’s pre-golden age of the 20s and 30s. A good story with a great tattooing backdrop to give you a glimpse into its history as a sideshow attraction.

The Tattooed Lady: A history, by Amelia Klem Osterud

A lovely book, profusely illustrated and well researched. This book tells the stories of some of the lesser-known female tattooed attractions, as well as the bigger names and chronicles the changing times in which they worked. I love that most of these tattooed ladies, some tattooers themselves, were able to rise above discrimination and objectification to empower themselves on their own terms. These tough and independent ladies really blazed trails and paved the way for future generations.

Ink on the page: Favorite reads from Tattooist Mav Mess

A helping of danger, adventure, feats of daring, and nostalgia.