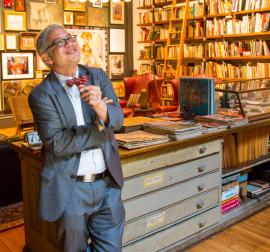 Thomas Lauderdale was raised on a plant nursery in rural Indiana. He moved to Portland in 1982 and founded the "little orchestra" Pink Martini in 1994. He has appeared as soloist with numerous orchestras and ensembles, including the Oregon Symphony, the Portland Youth Philharmonic, and Oregon Ballet Theatre. Active in Oregon politics since he was a student at U.S. Grant High School (where he was student body president), Thomas served under Portland Mayor Bud Clark and Oregon governor Neil Goldschmidt. A connoisseur of Pacific Northwest literature, he has hosted readings by Tom Spanbauer and poets Michael and Matthew Dickman. He maintains an active interest in local history and politics. Here are some of his favorite reads:

Portland: A Historical Sketch and Guide by Terence O’Donnell and Thomas Vaughan

There have been a lot of books written about Oregon and Portland, but I think the best book about Portland was written in 1976 by Terence O’Donnell and Thomas Vaughan, who led the Oregon Historical Society and just died recently. This is a beautiful book. I think that every person who moves to Portland should read this book. This is the book to read. The book is entirely readable, it explains a lot about the mindset and what’s inside the head of the people who came to Portland.

The Story of Opal by Opal Whiteley

This is an incredible story of a woman who grew up in Cottage Grove, Oregon. She was clearly a genius and was very much involved in nature, and kind of had a crazy life. I think that there was renewed interest, because at the Multnomah County Library, an author by the name of Benjamin Hoff, who wrote The Tao of Pooh, found The Story of Opal on the shelves of the library and the whole thing was republished. It’s basically the diary of a very advanced girl – I guess she was seven when she wrote it. It was declared a hoax at a certain point in the 1920s. It became a bestseller and then was declared a hoax. But it’s just incredible. She’s the original flower child of Oregon. She had this whole imaginary world. And even if she was in her teens when she wrote it, it’s still remarkable. The whole thing is just amazing. She has this whole secret world of flowers and animals and creatures, and all in Cottage Grove, Oregon, in 1920.

She is such a fantastic writer, and I was her assistant for about a year when I was in high school. She had a column in the Willamette Week called “The Slice,” in which people would write questions and she would answer them.

The Portland Red Guide: Sites and Stories of Our Radical Past by Michael Munk

I love this book! It has maps! It has pictures! It talks about how crazy and wonderful the history of Portland is. Whether it’s Emma Goldman, the pioneering feminist and anarchist, giving a lecture on lesbianism in 1915 at the Portland auditorium, two blocks away from my house, and getting arrested and hauled off to jail, to Woodie Guthrie living on SE 92nd in the summer of 1941 and writing all the songs for the Bonneville Power Administration, to the internment of Japanese-Americans during the war. It also talks about writers like John Reed, the Oregonian journalist who is buried in Red Square.

I Loved You More by Tom Spanbauer

I find myself underlining passages and coming back to them again and again. It just resonates. It’s so unbelievably honest and forthright.

Watch Me Fly: What I Learned on the Way to Becoming the Woman I Was Meant to Be by Myrlie Evers-Williams

This is a great, great, great book…I heard her speak at the art museum for Dan Wieden’s organization Caldera and Dan Wieden revealed that she had studied to be a classical pianist with dreams to play at Carnegie Hall.  We got her to make her Carnegie Hall debut, and we filmed it!

A Shout in the Street: An Excursion into the Modern City by Peter Jukes

A Shout in the Street is kind of like those Nietzsche aphorisms. It’s a collection of quotations and moments – film stills, photographs, excerpts from essays – and it’s about four different cities. The cities are London, Paris, Leningrad, and New York City. And they’re so beautiful. Small little quotations about each of these cities at different times. (Note: this work is out of print, but is available through the library by interlibrary loan to Multnomah County residents.)

My Librarian and our featured guest readers are made possible by a grant from the Paul G. Allen Family Foundation to The Library Foundation, a local non-profit dedicated to our library's leadership, innovation, and reach through private support.

You spoke of how these books are important to those who have come to Portland. I am a Portland native and wonder if you think they also have similar relevance to those of us born and raised here.
These are his favorite books that he would like to be noted for. Thomas has very little connection to majority of Library patrons. His interest and local old. His achievements and pseudo debutante status, are so removed from the everyday USA. These books seem to be descriptive ornament, in his path. Why do we need Suggested readings of a local, that given the chance..could have offered books outside of his comfort. This front page got my attention. Next time please have a local debutante/celeb/it person a little bit more grounded. Lets have A guest reader that focuses on the books instead of another ploy for gaining yet more attention to their success in hiking up the backsides of our imaginations.
To the first commenter: Thomas isn't here monitoring this blog, but I think he'd probably say that these books give us a deeper understanding of this place, even if we were born and raised here. You can find more in-depth reviews of these titles over on the Pink Martini blog - http://pinkmartini.com/news/ - Take a look at Thomas's summer reading list.
I enjoyed reading these recommendations. Thanks!
http://www.newyorker.com/books/page-turner/opal-whiteleys-riddles 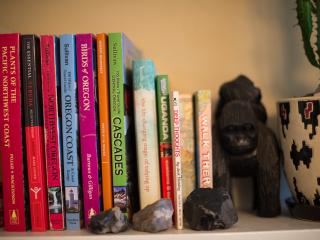