Greek and Roman history are subjects that continue to captivate our interests. A large part of this has to do with how much they influence our daily lives in literature, architecture, recreation, government, philosophy, and much, much more.

Even though there are remnants in today’s life, in comparison, life is very different than it used to be. Hour-long baths, arranged marriages, and having your father manage all your business until you are 25-years-old, are just some of the things that were customary then.  Would you be ready for public speaking or to lead an army when you turn 17 like this young adult living in Rome in 73 A.D.?

A glimpse of teenage life in ancient Rome - Ray Laurence

Life was exciting living in the Roman Empire with gladiators, chariot races, and exotic bath houses. It was a time that gave us great leaders such as Augustus, Nero, Julius Caesar, and Claudius. If you were a Roman leader, who would you most resemble?

There are some similarities to what life was like in Greece and Rome, but still, things were varied. Life could be very different even in places as close as Athens and Sparta. Depending on where you were born, and whether you were a boy or a girl, you could have a very different experience from those youth close by. Play this game from The British Museum that allows you compare the lives of both men and women from these two Greek cities, and learn more about daily life in ancient Greece. Be sure to take the Greek “house challenge” to see where you would find men and women hanging out, and doing what, under the same roof.

Why do you guys only have such littile info not helping my CBA
Well, according to the ancient Roman and Greek scholars, Rome was a Greek city, so there is no distinction between ancient Greece and Rome. Here is a video with lots of ancient sources that claim the Romans were Greeks https://www.youtube.com/watch?v=8a0ODTqPXkk I would like to hear what you have to say about that.
There is a great article that was in National Geographic titles "When the Greeks Went West," by Rick Gore and Sisse Brimberg (November 1994, Vol. 186, Issue 5, p.[2+]). You can access it through Multnomah County Library's National Geographic Virtual Library database: https://multcolib.org/resource/national-geographic-virtual-library. 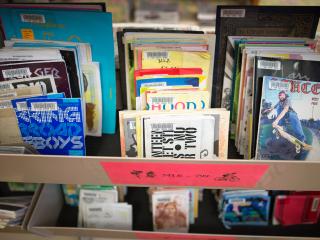